The Windscreen Chip they Didn’t Repair

Could Not, Did Not, or Would Not Repair?

Shortly after this (pictured) windscreen was hit by a stone, the car owner called his insurance company to arrange for the damage to be repaired. His inbound call was subsequently diverted to his insurer’s nominated repairer via the automated switchboard. An appointment was agreed, and he was happy in the knowledge that, in the circumstances, he did all that he could to reduce the risk of any further damage which, could potentially have resulted in a new windscreen. After all, he was now in the hands of an ‘approved repairer’, and they know what they’re doing, right?

Before attempting a repair, a technician will carry out a visual inspection of the damage. There are a number of things he (or she) will be looking for, to ascertain if the damage falls within a repair criteria (based primarily on the type of damage; its size and often position on the windscreen).  The technician is making an assessment on behalf of the insurance company (or the customer, if it is not an insured loss). This appraisal places a responsibility on the repairer to make a fair judgment based on practicality of repair, safety implications (in terms of driver vision) as well as fiscal reasons (repairing a chip is a fraction of the cost of replacing). In this case, an assessment was made on this damage: 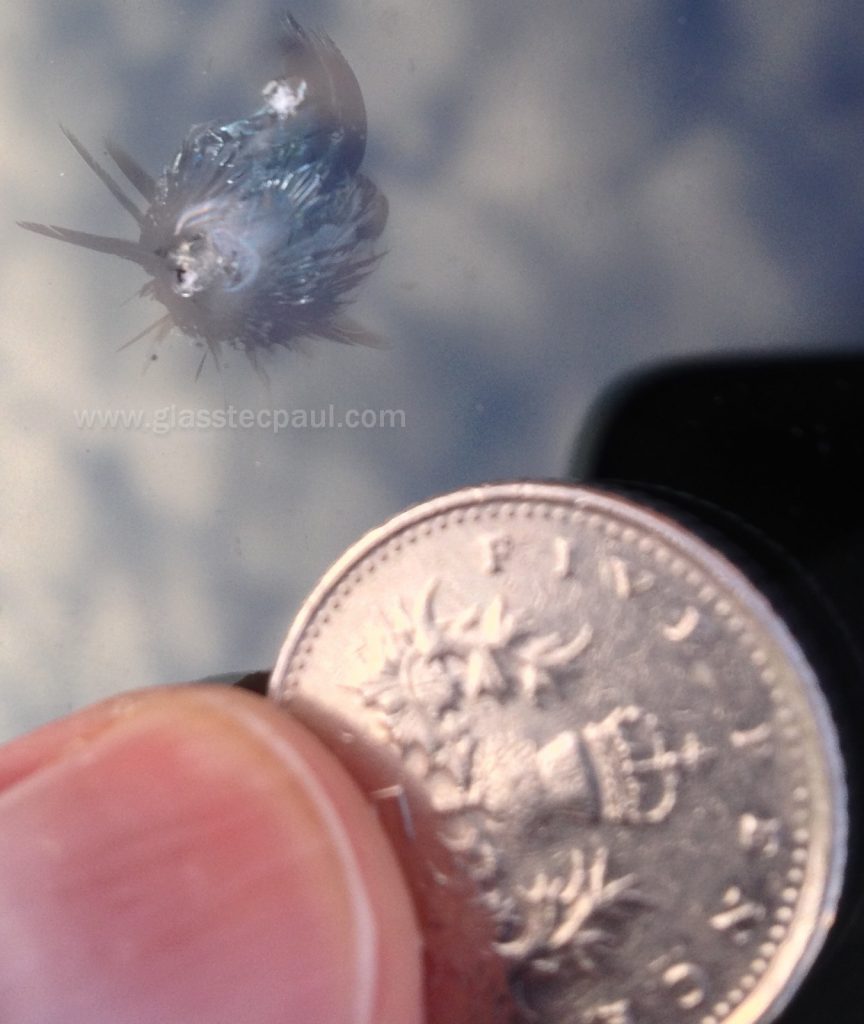 The diagnosis of this damage was a recommendation to replace the windscreen. In terms of permissible – or repairable – damage, this is where things got confusing (for the policyholder). According to his insurance company’s recommended repairer’s website, the upper (size) limit for repair is a £2 coin (28.4mm). This falls short (by comparison) of the 40mm limit set by the British Standards guidelines; the damage clearly falls well below both limits. A five pence piece measures 18mm diameter. When holding up a 5p coin next to it, the damage appears to be smaller, still.

According to British Standards, Zone C (the wiper swept area on the passenger side of the vehicle, and where the damage in this example was)  permits damage of up to 25mm to be repaired. Referring to the insurance approved repairer’s notes,  there is no minimum or maximum size specified for this particular area (only an indication that the damage must be contained within a 30mm perimeter (from the edge of the whole windscreen).

What was wrong with this stonechip, and why did they condemn the windscreen? The policyholder was told the damage could not be repaired due to ‘multi damage’. Closer inspection does show a second impact mark within close proximity of the initial damage. But the repairer offers no indication, no warning, no notes on “multi damage” to suggest a repair would not be possible before he got to them. The policyholder also commented that he felt a little pressured into agreeing to a new screen because of the advice he was given. Only his confusion at why such small damage would render his windscreen a write-off prevented him from authorising a huge expense being invoiced to his insurance company.

There is no ‘industry practice’ as such, which restricts or prohibits the repair of a stonechip which has a second impact mark. The guidelines are not clear; the emphasis (and urgency) appears to be placed on repairing chips. But there is no definitive reference point for what can, and cannot be repaired. Why? Because other than the (separate) BS and MOT guidelines for windscreen repair, there is no industry practice. There is usually no second opinion; the insurance company trusts (and accepts) the repairer’s claim assessment (or the paying customer usually trusts what the expert says). In this case, the policyholder doubted the repairer’s opinion and despite being told he would need a new windscreen (with some added pressure on what might happen if he didn’t replace post haste) he declined the advice (also because the repairer would not agree to fitting an OEM windscreen to which he was perfectly entitled to given the age and marque of the car).
It is upon this trust that insurers are paying out for, often needless, replacement windscreens. Windscreens which, whilst perfectly repairable, have been replaced after an assessment was made by somebody with whom they have placed trust and responsibility to make a fair, honest and professional judgment on their behalf. Insurance companies appear to be accustomed to settling claims for windscreens which have been condemned. The trend (according to one windscreen insurance claims handler) is that the price for one repair is the same for multiple repairs (on the same screen). If there are more repairs than ‘economically viable’ the recommendation is to replace. Whilst this may seem sensible for a windscreen costing less than £150.00 for example, the same rule – in terms of making that same assessment for the insurance company – when applied to a windscreen which costs considerably more (several hundred, or even thousands of pounds) is clearly ill-advised and frivolous.

This practice is clearly open to abuse. An abuse of trust. How many windscreens are being (or have already been) replaced when they could have been repaired economically, and to an acceptable standard? Why does this practice of scaring policyholders into booking a repair, and then subsequently condemn the windscreen because of some unwritten rules exist? Because they are not experienced or trained to deal with every type of repair? Because their equipment cannot cope with complex windscreen repair? Or is it because their core business is to supply and fit new windscreens? You decide.