Problems with a Porsche 993 Windscreen

The Porsche 911 993 windscreen is one of the most uncomplicated and straight forward windscreens to fit, yet they can give you many problems if not done correctly.

It’s fairly common knowledge that the two most prolific issues which arise from the windscreen, or windscreen area of the car, are corrosion of the aperture (or pinchweld) and a very irritating vibration – or creaking – noise. Conceding that the former could well be attributed to a design flaw, both problems are usually traceable to human negligence, especially if the car has had its windscreen replaced. To identify and illustrate what these problems are, and just how bad they can get, I have chosen this 1995 car on the basis of its age, condition and comprehensive service history.


This 993 is extremely ‘clean’ and looks to be a fantastic depreciation-proof investment.  A C4 coupe 6 speed manual, she’s flawlessly finished in a Polar Silver metallic paint with an unmarked – and as new – gray interior; hard backed leather sports seats to boot. The car has been well maintained and between just three former keepers every mile, every turned nut and bolt, has been meticulously accounted for. The current owner wanted to address two annoying problems which first began to surface a few months after he’d bought the car: corrosion (on the scuttle below the windscreen) and, “it sounds like the pitter patter of rain” he said.

NB: I have covered the VIN in order to concentrate on the subject, and not on the car or its identity.

Like with any windscreen replacement, most car owners will see the finished product; in most cases, they start with a damaged window and when the work’s done, they’re presented with shiny new screen. If there are any issues in the finish, sometimes they’re immediately obvious but some problems will not manifest themselves until later. One of the most annoying scenarios is finding such a problem as the new owner of the car. The story with this car started with such a sketch. 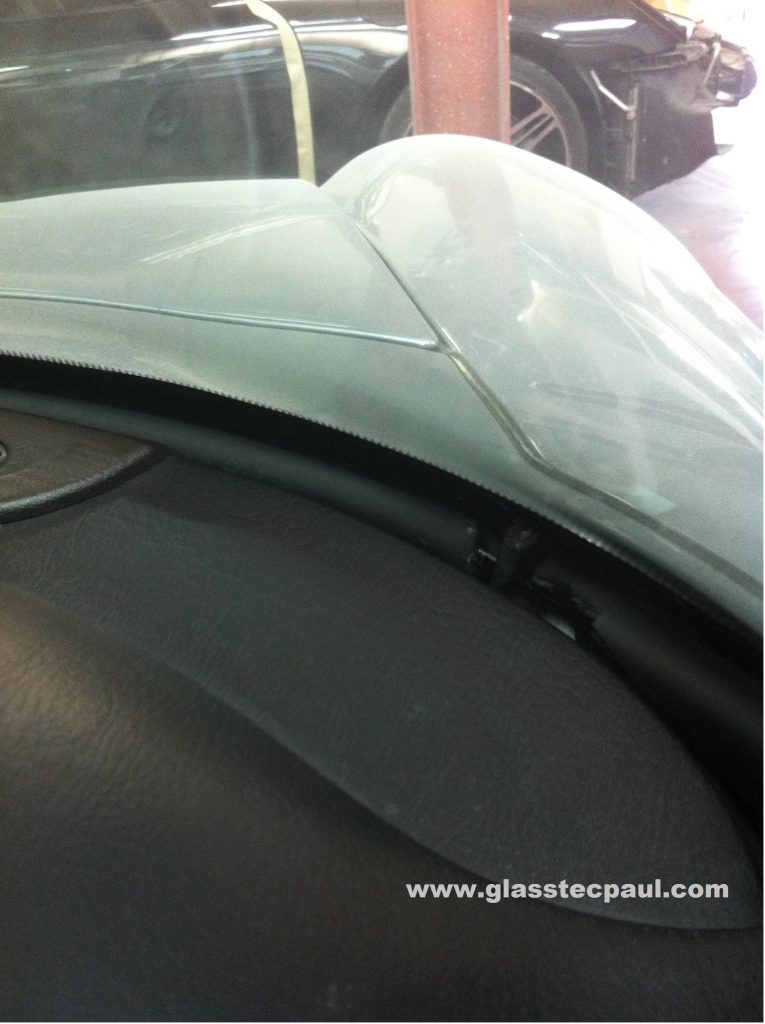 To be fair to the current owner, it’s an easy detail to overlook when looking over an otherwise fantastically maintained – and presented – car. “It was only until after I got it home and wondered if it should be like that,” he said “I decided not to query it as I was so pleased with the car”. Some six months into his ownership, his ear ‘tuned in’ to the infamous creaking noise and like many other Porsche owners, he put it down to a dry bush or guessed that it might be a tightness in the dashboard somewhere. The car subsequently ended up with a Porsche independent who immediately spotted the gap in the damming rubber, which prompted him to look for other telltale signs. On closer inspection, there was no doubting the windscreen had been replaced. Underneath the outer trim, or ‘sealing frame’ was not a pretty sight.

Please also note that there may have been approximately a year (or more) between spotting these issues and having them corrected; the bubbling paint was not as bad when first noticed.

My remit was to remove the windscreen so that the bodyshop guys can tackle the corrosion. The following pictures tell their own story. 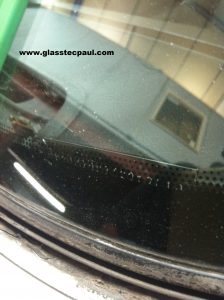 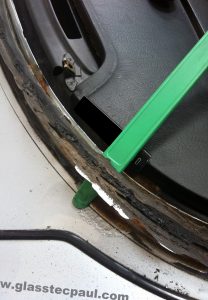 The windscreen was removed – intact – and whilst it was difficult to ascertain if had been fitted from new (or removed and refitted) there was no mistaking the attempts to cover up a multitude of mistakes. 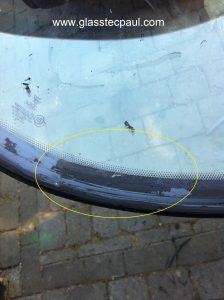 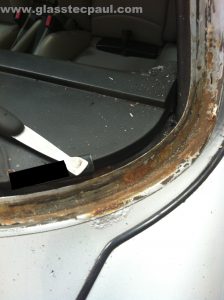 Leaving the bodyshop guys to deal with the corrosion (which pointed towards some over zealous use of a knife by a previous installer) the windscreen needed some extensive correcting of its own before it would be ready for refitting. My suspicion is that for whatever reason, the windscreen had already been removed and refitted. This may have been in a bodyshop (for paint.corrosion correction) or possibly even to rectify a replacement problem such as creaking, leaking or wind noise. 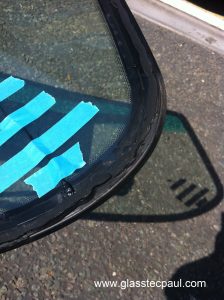 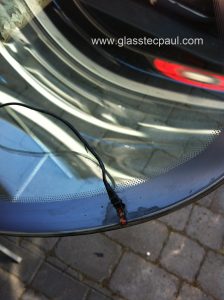 There was a lot of making good to be done and found hidden beneath the mess was one of the reasons why these windscreens creak: silicon contamination. In order to obtain a more flush-fitting finish, the 993 front screen comes, from the manufacturer, ‘pre-encapsulated’ within the trim frame (like the one on the heated rear window, this is not available as a separate part). The plastic-coated frame is slotted onto the glass and provides a groove for the outer (rubber) trim to lock into. With the trim frame around the perimeter, a bead of Polyurethane adhesive (PUR) is applied over the line where the trim frame meets the glass. The idea is to bond these two parts together and in doing so, provide a raised profile to which fresh PUR is applied when fitting the windscreen to the car. A mistake many make is to cut into this pre-applied PUR. In this case, there was little left of the factory-applied PUR; the silk-printed ceramic frit had been obliterated with black adhesion promoter and the trim frame was loose. Given how contaminated the substrate was, the best policy was to cut right back to the ceramic coating; much of what was left of the existing PUR simply peeled off.

The next steps were crucial. Nobody likes doing preparation work; it’s boring, it takes time and you cannot see an immediate result.  However, the importance of prepping the substrate sufficiently couldn’t be more important in this case. This screen was riddled with silicon and had to be removed before we did anything else. 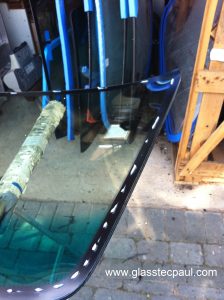 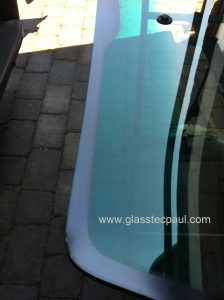 Clean as a whistle

With the contact surface neutralised, work began on getting the trim frame back on and bonded under fresh adhsive. There are a couple of points which I am purposely omitting at this stage under the banner of trade secrets but mainly because this is a very involved remove and refit of a 993 screen and that those particular details would probably not apply to the fitting of a new screen.

With the fresh PUR applied, the windscreen is left in a cool, dry room to allow the adhesive to cure through to its core (brand, temperature and humidity dependent, this could take up to 84 hours). For your information, I use a Sika AGR OEM Approved PUR adhesive system. Once the PUR has cured, some trimming may be required to allow the screen to sit at the required height.

From the moment the fresh paint has been baked, the car must be allowed to cool down for 24 hours after it is removed from the oven. This is part of the paint curing process. Sika recommends a bonding process specifically for freshly painted cars and this process is followed according to their guidelines. 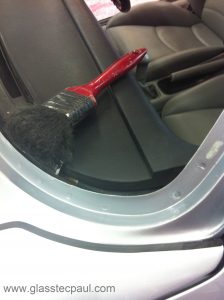 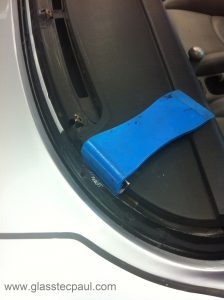 With the inner damming rubber in place, there are some minor adjustments to be made before the windscreen can be bonded back into place. These tweaks are made from ‘dry’ fitting the screen and ascertaining the where correct position is in relation to where – and how – the screen will sit on freshly applied PUR. Some final preparation touches are made before setting the screen into position. And she’s in:

View from inside – antenna no longer visible.

The final step is to make sure this problem doesn’t creep back in years to come.

Some shots of the finished job.

I invite, and welcome your comments.