Helping You Understand the Ballocks and the Bullshit

Have you had your windscreen repaired recently? How did the attempt turn out? Was the repair good, bad or indifferent? Were you confused about what you were told (by the repairer) at any stage? If you were, the chances are you had the wool pulled over your eyes. 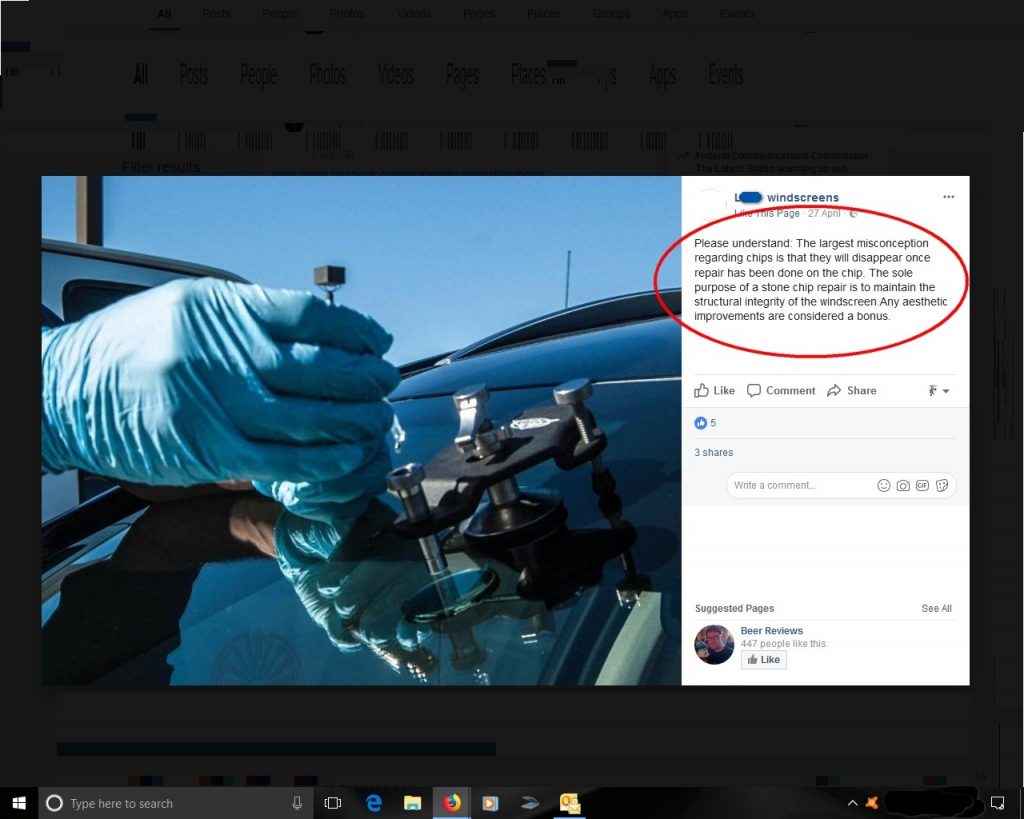 “Please understand: The largest misconception regarding chips is that they will disappear once repair has been done on the chip. The sole purpose of a stone chip repair is to maintain the structural integrity of the windscreen. Any aesthetic improvements are considered a bonus.”

Take a moment to comprehend what the message conveys.  The first part of the statement is true; repaired chips (or cracks) don’t disappear. There will always be some evidence of the repair. It’s not magic. How much you can see after the attempt to repair usually indicates how good – or not – the repairer is. The rest of the statement makes no sense, “The sole purpose of a chip repair is to maintain the structural integrity of the windscreen”. This sounds very technical and anyone with a damaged windscreen would be sitting up and taking notice. However all of this is undone with the closing line: “any aesthetic improvements are considered a bonus”.  In effect, you might as well say you rubbed your hand over the damage, so it should be fine. The very fact that there is a technical process in attempting to repair a damaged windscreen means, by definition, that there must be a discernible difference if that attempt is successful?

Some technical background to this is in order.

A windscreen repair technician should know how to repair a break , or what the likeliest outcome from his or her assessment of the damage. Understanding the science behind windscreen repair can help the repairer not only perform successful repairs but also educate their customers about the process instead of conning them of their money. Claiming that the break has been ‘filled’ or ‘sealed’ despite it looking the same after the process than it did before the technician started is probably the most common excuse. Most of these guys probably wouldn’t know what a good repair looks like never mind know how to go about achieving one

To attempt a successful windscreen repair, you must rid the damage of air, contamination and moisture. Any loose debris must also be removed. This process alone debunks the ‘any aesthetic improvements are considered a bonus’ line, and shows how easily you can be fooled by someone purporting to know what they’re doing under their professional guise and pitch. The next step is to fill all areas of the break with resin. This may seem pretty straightforward, but it is not as simple as it sounds; to induce repair resin sufficiently requires different skills depending on the type of break. Time to ask Mr Aesthetic-Improvement-is-a-Bonus how to tell the difference between damage with resin in it and one without, perhaps?

There is usually an impact point although damage can still occur below the glass surface. This can be as small as a pinhead or a much larger impact crater which can extend from a couple of millimeters to way over the repairable limit (determined by the injector diameter). Behind the impact will be a circular shape (sometimes appearing to be dark or black) or a conal appearance in the glass. This is a basic cone – or part cone – damage and arguably the easiest to repair as most of the ‘bullseye’ or ‘half-moon’ appearance (if filled adequately) will be reduced to a slight watermark appearance once the process is complete. Small cracks or ‘legs’ radiating from the damage center form the more complex breaks and are generally more difficult to fill (and come with a slightly higher risk factor attached; the more legs, the greater the chance of one of them extending or cracking off). An experienced and properly trained repair technician will know how to manipulate the different types of damage in order to get the resin to flow (there are variables on this too). Irrespective of the type of damage you must remove any trapped air to allow the resin to flow. Ideally, you should remove any air from the break before any resin comes in contact with the damage. There are times that air must be drawn out during the repair; this has to be pulled through the resin by way of vacuum and pressure cycles (the force acting upon the air must be stronger than the surface tension of the resin in its way).

The most important quality of a repair resin is its performance. First, the resin must be able to enter and reach all areas of the damage; product viscosity and by this, velocity (under applied pressure or vacuum). The cured resin should also have enough tensile strength to withstand any flexing, expansion or contraction that the windscreen may be subjected to.

Another equally important characteristic is the resin’s refractive index after it has been cured. The refractive index determines how much a light wave ‘bends’ when entering and leaving the surface of the resin. Ideally, it should be the same as that of the windscreen, so that any light passing through the resin – and glass – acts the same as if it were passing through glass only. This makes the resin in the damage about almost invisible, upping the game from being considered a bonus as our friend suggests.

Resin cures as the result of a photochemical process in which monomers harden or cure upon exposure to ultraviolet radiation. A specifically formulated monomer will bond with other monomers – or polymerize – when it is exposed to UV light and isolated from oxygen molecules. This UV ‘curable’ monomer has a photo initiator which absorbs UV energy and initiates a polymerizing reaction in the monomer. In order for this reaction to take place, the UV radiation must be in the correct wavelength (usually 365 to 380 nanometers) and be of sufficient intensity to completely polymerize the resin within a few minutes if not seconds when using a high powered lamp. Any aesthetic improvement is considered to be a bonus, or does he mean a fluke in his case?

As Far as Misconceptions Go…


While many claim that windscreen repair is not an exact science, the facts prove otherwise. In simple terms, if the damage looks the same after the attempt to repair it, it has not been repaired. Decades of research and development into what some people have even referred to as a black art confirms that anyone rolling out piss poor excuses and statements like the one above is insulting your intelligence. The aim of this post is to arm you with some basic facts so that you can challenge the bullshitters and if, as a result, you can use these to prove how your perfectly repairable windscreen has now been condemned as a result of incompetence, well, this in itself would be considered the real bonus.