Have you had your windscreen replaced recently? Is your car equipped with an Advanced Driver-Assistance System? Were you advised (or even warned) about the need to recalibrate that device? Whether your ‘smart’ windscreen has been replaced or not, there is a realistic chance that it might need to be in the future, and this is where you could be faced with more questions… or perhaps not. The subject of recalibrating ADAS devices is a Pandora’s Box full of unsubstantiated claims.

For those new to the technology, some background: ADAS systems are designed and developed to automate and enhance vehicle systems for safer and better driving. These features are designed to help with monitoring, warning, braking, and steering tasks. ADAS relies on inputs from multiple data sources, including automotive imaging, LiDAR, RADAR, image processing and computer vision. These devices are mounted in various places in and around the vehicle; some are mounted behind the windscreen. 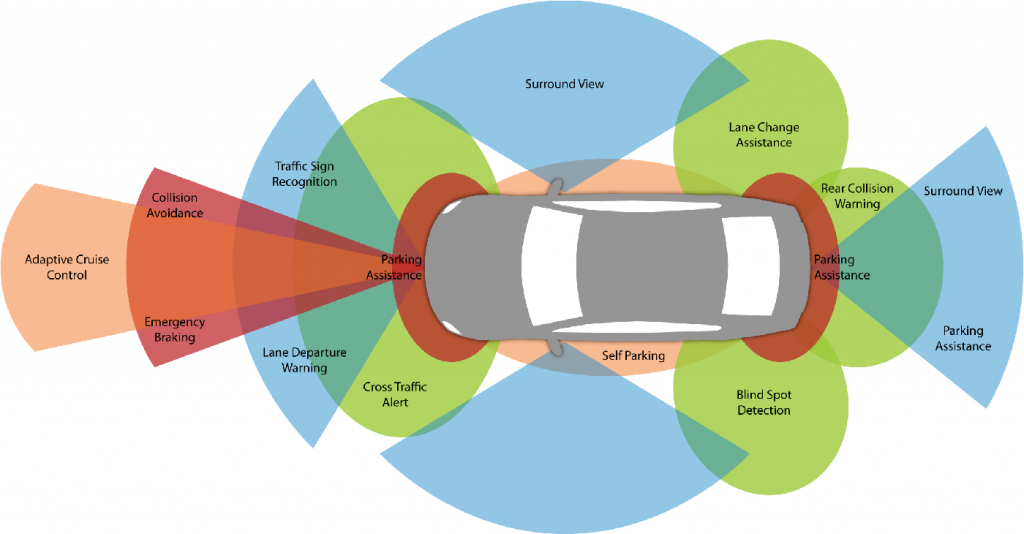 Advanced driver-assistance systems are one of the fastest-growing segments in automotive electronics. In terms of car design and evolution, motorists are in safe hands. Ultimately, and until we have autonomous vehicles, the motorist’s hands should however still be on the steering wheel.

Does your camera (or device) need recalibrating after the windscreen has been replaced?

There are a variety of factors to consider, but to cover all bases the blanket response would be to say yes it does. However, before the recalibration apparatus was made available to repair shops, windscreens on cars with ADAS were still being replaced. If the answer is to be yes, why haven’t those vehicles been recalled? The counter argument to that could also be that none of those vehicles needed adjustment, or even, none of them went into default mode after having the windscreen replaced and, worse still, crashed as a result of a misaligned device. There are no reported cases of crashes, injuries or fatalities which were attributed to an uncalibrated camera. Meanwhile, the same cameras are still being re calibrated today.

A motorist emailed me to ask if his device needed calibrating post windscreen replacement. His vehicle featured ‘road sign assist’ which he said he didn’t use anyway. The company who were replacing his windscreen stated that he must drive the car to another one of their sites (30 miles away) to have the camera recalibrated. There was an additional cost implication to this procedure (over £150) as well as his time and fuel to get him there and back. If it was – according the repairer – paramount for his safety why were they sending him on his way, in the compromised car, to another destination 30 miles away? He went ahead and had his windscreen replaced but decided against the recalibration procedure on the basis that he didn’t agree with paying what they were asking for, and then having to embark on a 60-mile round trip in order to get it. Interestingly, he later had his vehicle checked by a manufacturer main agent and there were no flags or faults in the vehicles computer system. Everything worked as it should. The Road Sign Assist device checked out okay.

When replacing the windscreen on a vehicle, if the windscreen is a genuine OE product and you are fitting it using the correct bump-stops/trims/damming/mounting components, and within OEM tolerances, as long as you do not disconnect the ADAS device and put the vehicle through an ignition cycle, there is nothing to detect the new part.

Put simply, if you are using manufacturer branded products, fitting them to millimeter precision, and do not put the vehicle through an ignition cycle [with a device disconnected] the car will not know the windscreen has been replaced. It is therefore unlikely that you will encounter any issues. Furthermore, many (if not most) devices are auto-calibrating. They have to be, to allow for constant variables during use. The issues occur mostly (in terms of windscreen replacement) when non-genuine parts are used (referred to as aftermarket parts). Comparing an OE windscreen to an aftermarket copy of it, the differences often become immediately apparent such as misaligned brackets (to which the ADAS device is mounted) or that the material used is inferior. When you mount a camera to its bracket or plate which itself is not positioned correctly, the accuracy of that device is immediately compromised. This therefore, is a scenario where recalibration would be needed. Original parts do not offer any such issues.

The (American-based) Insurance Institute for Highway Safety conducted testing of windscreen-mounted advanced driver assistance systems in 2017 and found that a misaligned camera [on a test vehicle] led to issues with the vehicle’s autobraking and lane-departure warning functions. Honda Collision Marketing Assistant Manager Scott Kaboos summarised after the research that Honda required OEM windscreens be used and that they had seen “many issues” where aftermarket glass led to a situation where the calibration would not “take properly.” After the [repair] shop replaced the windscreen with an OEM edition, “everything worked fine again.” Kaboos stated.

IIHS senior test coordinator Sean O’Malley stated that this demonstrated the need for calibration rather than a ban on aftermarket parts concluding that, “The bottom line is that it could still be calibrated to work as intended.” While a factory-misaligned bracket was found on an aftermarket windscreen, the IIHS found no real issues with aftermarket glass itself, according to O’Malley. Chemical composition, laser refraction and refractive index testing found largely that ‘glass is glass’.

In the UK there have been no reports or stories in the press about firms – nor individuals – being taken to task over negligence. Why? Is it because there have yet not (and thankfully)  been any incidents? Could it also be that there actually isn’t any requirement for an installer to carry out a recalibration? In the same way that any Fred-in-a-shed-with-a-bag-of-tools can replace a windscreen among all the cries of how important structural rigidity is, and how airbags rely on the windscreen to be adequately bonded in order to be effective (provided the occupants are wearing seatbelts in the first instance) anyone can also replace the windscreen on a car equipped with ADAS technology. Is it compulsory to recalibrate those devices? No. Is it necessary to recalibrate them? Maybe.

Whether recalibration is compulsory (after windscreen replacement) or not, are they being checked correctly? Where are the before and after test results? Who is regulating that part of the industry? Who is policing it? How do we know that the procedure was actually carried out? Where is the second printout showing how much adjustment is or was needed? Proof? Is it merely a box-ticking exercise to distance from blame, or something to staple to the invoice to validate the extra charge?

This is a subject that will run for a while, and during that time the ones making the loudest claims in favour of recalibration are also looking for a return on their investment into what is being sold throughout the motor industry as a revenue stream.

Have you had an experience to do with ADAS and windscreen replacement, good, bad or indifferent? Please get in touch.